You Are Here : Home » Lifestyle » Top 10 Most Luxurius Cabin Aircraft In The World

Top 10 Most Luxurius Cabin Aircraft In The World

aircraft is air transportation, aircraft mileage by using our trip became shorter. humans are increasingly busy, so they lack time to rest. this is what makes the idea for some airlines to provide services like at a hotel. Here is list of Top 10 Most Luxurius Cabin Aircraft In The World. 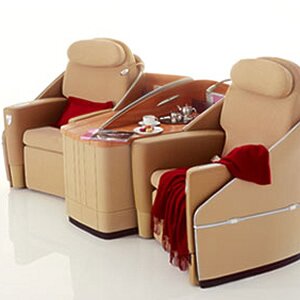 Air France features seats that feel like they were ripped right out of your den. Sporting side-by-side recliners that fold out into flat beds, these beefed-up seats in the first-class cabin make sure that you and your eight fellow travelers feel right at home. Air France stepped up its first-class offering in response to the new airlines rolling off the assembly line. The cabin reflects the idea of a French work experience, which is to say it’s comfortable and light on the actual work. Although Air France is really just retrofitting its first-class cabins on older airlines, it’s good to see that passenger service, as opposed to cattle herding, is a priority over there 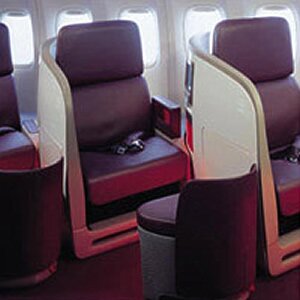 Richard Branson can’t seem to do anything like a normal human being when it comes to the business world. He’s a billionaire who knows how to get work done anywhere. This guy has been defining quality experience for quite some time and his international carrier, Virgin Atlantic, is no different. First, you won’t find a “first class” here. Instead Virgin has branded the experience “upper class.” Virgin boasts the widest seats and the widest and longest beds out of any classic first-class cabin. Like Air France, Virgin’s fleet of 747s was designed in a different era, yet they’re able to emphasize an upper-class experience from ticket purchase to flight time. 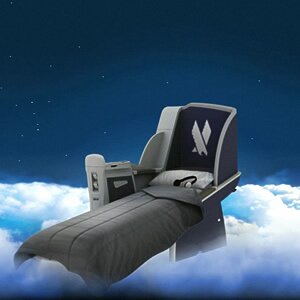 American Airlines has been pushing the envelope in productivity onboard an airline. Introducing what they call the “flagship suite,” the emphasis is on prepping for that meeting in Taipei while in the air. Features like swivel seating that lets you meet face-to-face with coworkers, laptop power outlets at each seat and individual satellite phones you’ll find everything you need to work right from your seat — which also carries an unintended downside. When your company books you first class on one of American’s 777s, you’ll have little chance to sample the spa-like amenity kits. 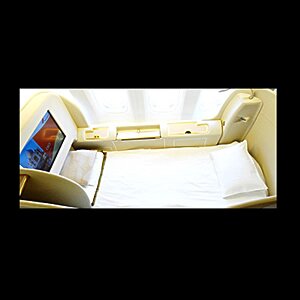 Air India was an early adopter of the concept that travelers deserve a little privacy in their travel experience. First class on Air India consists of 12 “sleeperettes” designed to insulate one traveler from another, aiming at giving them a “personal jet” experience — which is important in an economy where the likelihood of having access to a private jet is dwindling at a rate inverse to the chances you’ll be flying commercial. Sure, it may be a step down from a private jet, but Air India doesn’t see it that way. The airline gives you a flat bed, plush carpet and a proprietary “Personal Entertainment Appliance” to cover all of your television, movie and music needs. 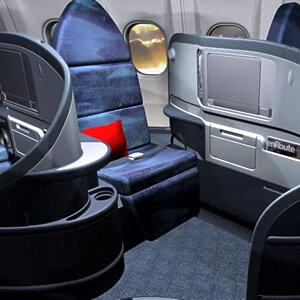 The first-class seats on Air Canada feel quite a bit like a futuristic office cubicle, which in a way could doom us all. With a lie-flat bed, ergonomically designed seats and laptop power and data jacks, Air Canada has entered the list with a completely competent, plush and well-designed first-class experience. The in-flight entertainment is top-notch, with individual armrest screens, three days worth of on-demand video, individual DVD players, and premium news — you’ll never be out of the loop. Hopefully, office managers don’t fly Air Canada too often. If their seats really are an omen of what’s on the horizon, they may never let us leave the office. 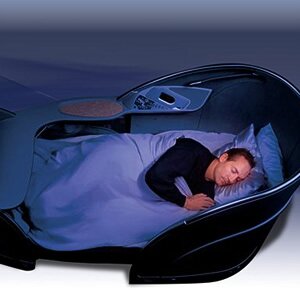 All Nippon Airways has taken your seat and wrapped it in high, curving walls. Flying then becomes almost a pod-like experience. Everything from your own personal monitor to your slide-out dinner table is contained within your own space. Personal space is something airlines have been shedding at every possible turn, so it’s good to see that All Nippon is building that personal area back into its first-class section. Each pod has all the basics covered for work and play. All Nippon Airways makes sure you’ll be able to make a call on your personal satellite phone while working on your laptop powered by your own outlet. And they make sure you can do so in complete privacy.

The demi-cabin experience in British Airways’ first-class section is billed as a “private sanctuary.” For ad copy, the airline isn’t far off. Privacy and insulation are paramount among BA’s concerns for its passengers. With turndown service and full linens for the 6?6? bed, the sleeping experience is a treat. When you need to stay awake and prep for the meeting in the air, BA’s got you covered there as well with power outlets and phones so you need never be out of touch if you feel that’s important. British Airways may be fine for business, but the real treat is sitting down with a cocktail before bed and really getting into the luxury that is the sleeper demi-cabin. 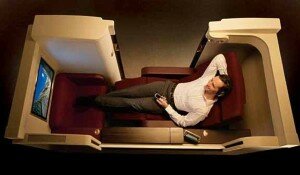 While British Airways may have a demi-cabin, Jet Airways went ahead and gave you a private bedroom complete with a sliding door. You don’t get more private than that. In that bedroom you’ve got a 23-inch flat-screen TV, one luxurious seat for you and an additional small seat that doubles as an ottoman if you’re a tall drink of water that really wants to stretch out. The ability to wall yourself off from the outside world, flight staff and all, is really the dream of every air traveler. With Jet Airways’ cabin you can be as productive as you want to be or you can stew in your flight-induced anxiety within the privacy of your own bedroom. 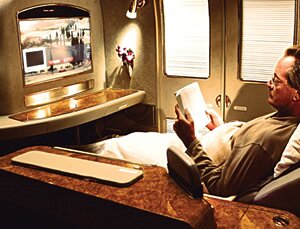 You really have to hand it to the Emirates right now, they are taking outside-the-box thinking to an entirely new level. Want to travel to Dubai and see some of the outrageous architecture they’re working on? Go ahead and do it in style on board Emirates first class, which has taken the revolutionary concept of a private bedroom in air travel and added that touch of ridiculous. In addition to the flat-screen TV and requisite bed, you’ll find that you have your own coat closet, vanity desk and personal mini-bar. If that third gin and tonic has you a bit apprehensive about your flight, you can monitor the whole thing on your personal TV via the series of cameras mounted all over the plane. The level of luxury here is absolutely absurd. 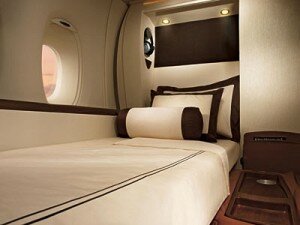 Far and away the best experience possible in any first-class section anywhere in the world; Singapore Air doesn’t just provide a private bedroom, it provides a private suite. It’s not even really a suite, it’s like a flying apartment. Every other offering on the list has a seat that turns into a rather comfortable bed. Singapore decided that was cheating and not quite kosher with the stress of international business. The airline will just give you a comfortable recliner and set it right next to a static bed designed by Jean-Jacques Coste, a renowned French yacht designer. You get a chair and a bed in the single cabins. If you happen to be traveling with someone, the option of a double bed is available. This is the absolute best experience you can have flying with any other passenger on board with you.

What you want to experience the most luxurius cabin circraft in the world ?

The Most Advanced T-shirt...